What to Do About a Workplace Burn Injury?

There are many jobs where workplace burns are a common occurrence. In almost every state, workers have the option to file a workers’ compensation claim against their employer; however, Texas does not require employers to subscribe to its workers’ compensation program. If comp is not available, what else can an employee do when they are injured at work? 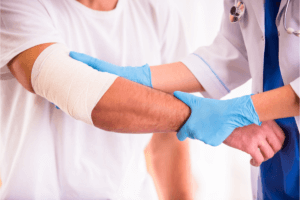 If an employee suffered a workplace burn injury and their employer is a workers’ comp nonsubscriber, they can file a lawsuit directly against their employer. To bring a claim against an employer, the employee will need to have evidence that the burn occurred at the place of work during work hours. Many job sites have workers from a variety of companies, however, so a work injury lawyer can investigate the circumstances of your accident to identify all potentially responsible third parties. Additionally, if the burn was sustained through faulty equipment, it may be possible to also go after the manufacturer or distributor.

Can You Sue an Employer for a Burn?

As long as the employer does not have workers’ compensation coverage, then an employee can sue them for a workplace burn injury. Before filing a personal injury lawsuit, your attorney will need to evaluate the severity of the injuries and the quality of medical assistance being provided to ensure you are being taken care of and to devise the best case strategy moving forward.

After an initial investigation, most lawyers begin informal negotiations with the representatives of each responsible party. If those do not work, then a civil lawsuit is the next step. This will increase the pressure on the employer and the other defendants, which may lead to the case being settled. Generally, most civil lawsuits tend to be settled before going to trial as this will reduce the costs and time spent for both sides.

An employer cannot stop an employee from bringing a claim against them for a workplace injury. If someone has sustained a burn injury while performing a duty of their job, then they have the option to go after their employee and any other responsible parties for financial compensation.

Who Else Can be Sued for a Workplace Burn?

Workplace injuries can occur in a variety of settings and a variety of ways. When an employee is injured on the job due to the negligence of another, most people believe the only recourse is a workers’ comp claim or suing their employer. To avoid future hardships with accident-related medical bills, injured workers should consider filing a third-party claim against any other responsible party or parties.

In general, if a worker is injured on the job as a result of the negligent actions or inactions of someone other than their direct employer or as a result of faulty equipment, they are likely eligible to file a third-party personal injury lawsuit.

Lodging a third-party claim against the person or entity responsible for inflicting the burn or causing the accident will likely require a worker to prove negligence; however, if faulty equipment causes the burn, then the manufacturer and others along the supply chain process are also potentially liable.

What Damages Can A Workplace Burn Injury Victim Recover?

In a lawsuit, the damages a plaintiff can claim for a burn at work depend on their specific injuries and losses. With a civil lawsuit, the injured worker will be able to seek damages for both economic and non-economic damages. Generally, damages in burn injury claims include:

Non-economic damages like pain and suffering or other non-monetary damages can also be recovered from the employer and/or any other responsible individuals or entities for burn injuries suffered on the job.

Types of Jobs Where Workplace Burns are More Prevalent

Workplace accidents occur far more frequently than they should. In the event of an occupational injury like a burn, employers will be unhappy because any reported injuries can raise the cost of insurance, training, and medical expenses and will cause a disruption to at least a few parts of the company for a time. Employees especially want to avoid injuries like burns because this can cause extensive pain, missed time at work, and medical bills. They will likely not be able to support their families during this time, which is scary and stressful on top of the pain. Despite this, preventable injuries such as burns continue to occur far more frequently than they should.

Jobs whose workplaces see the highest number of burns are those that typically involve kitchen work or handling of hazardous chemicals. The World Health Organization (WHO) notes the risks that leave workers more susceptible to burns to include:

Some workplace burns can be avoided. However, accidents do happen, and a worker should always have recourse when they sustain an injury at work.

Hiring a Personal Injury Attorney for A Work Accident Lawsuit

Injured workers should not have to endure additional suffering through financial burdens resulting from a workplace burn. If a worker has been injured while on the job in Texas, they should seek legal counsel to discuss the possibility of bringing a lawsuit against an employer or third party.

Lawsuits can be complex and will require the investigation and discovery of any evidence related to the case, including injuries, treatment, and related expenses. No one should have to deal with this on their own, especially when they should be dealing with recovering from their burn injuries. Hiring an experienced personal injury attorney will put the burden on the lawyer to obtain the evidence and file the lawsuit while giving the injured worker the time they need to recover.

If you or someone you love was injured at work, we can help recover lost wages, medical bills and more.